Stoic philosophy is a set of practical life-skills that originated in ancient Greece and Rome around 300 BCE. Heavily influenced by the teachings of Socrates, natural laws and physics; Stoic philosophy is a unique counterbalance to Jungian psychology in Dr Gordillo’s Story Image Therapy (SIT) and Universal Education and Psychology more generally. 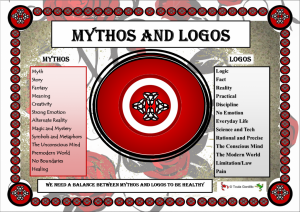 Like Jung, the Stoics (particularly the later Stoics), also valued myths as important. They used stories as allegories and referred to the Legend of Hercules as a guide… viewing the demi-god as a type of role-model.

Much to the dismay of individuals such as Carl Jung and others, we are becoming increasingly disconnected to ourselves and our innate spirit in the modern world. “This urgent need to get back to the psychology of antiquity, to the world of symbolic fantasy and creative imagery, together with the growing need for sound Stoic advice, is one of the reasons I created Story Image Therapy (SIT),” Toula explains. “At the beginning of the process, however, my methods were definitely not conscious.”

“Universal, ancient stories and images have helped us to form our roots… to know who we are, and our place in the world. And stories and images continue to deliver important life-lessons for young people, indeed all people, everywhere.”